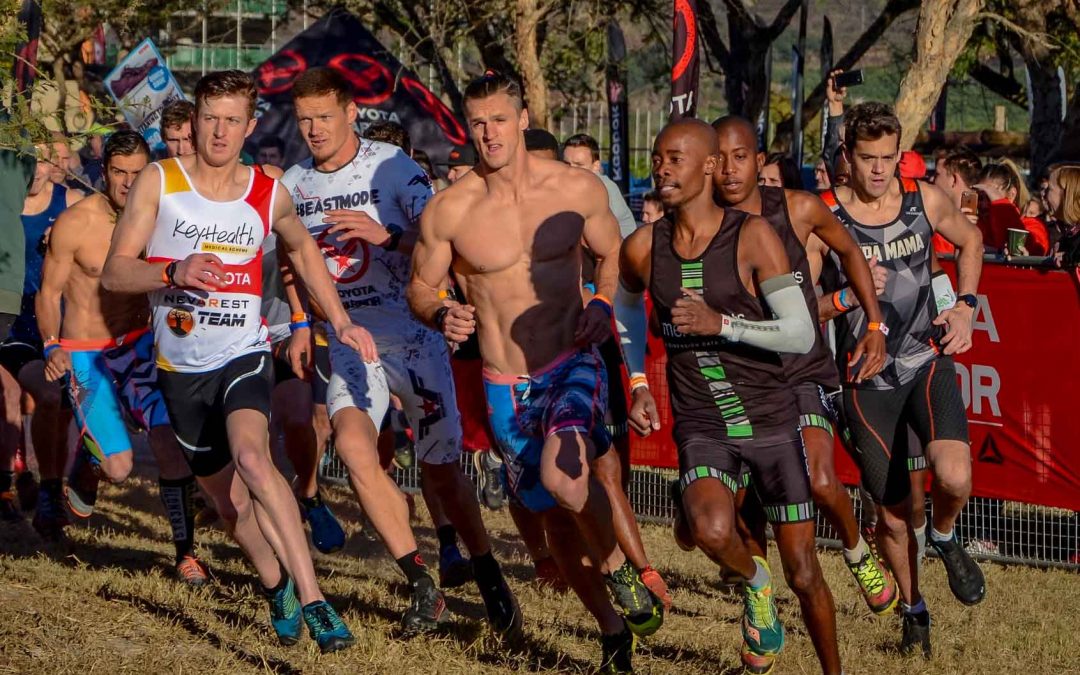 MPUMALANGA, NELSPRUIT, 16 AUGUST 2018 – This past weekend, 11 August 2018, Mbombela Stadium in Nelspruit attracted loads of eager athletes as it played host to Race 6 of the 2018 Toyota WARRIOR Series, powered by Reebok.

As Mbombela is the gateway to Kruger National Park, the area is renowned for wildlife sightings and an authentic bushveld feel – providing the ideal space for participants to bring out their inner WARRIOR and take on a proudly South African adventure.

Says the Black Ops Men’s Elite Winner, Smit, “This weekend was one of my best results ever, I won my first ever Warrior Black Ops Elite race. I got into a good rhythm at the start of the race and just kept the pace going. The flat course suited me well – there were no hills to stop me. I just felt really great racing today.”

In the women’s elite race, Nedene Cahill (Supa Mama) proved the better racer in Mpumalanga, finishing the course in 01h40m07s, 8 minutes ahead of SA OCR Champion, Trish Eksteen (Supa Mama) in second with a time of 01h48m25s, and Carla van Huyssteen (KeyHealth Team Nevarest) in third in a time of 01h49m50s.

In addition to the honours and the R10 000 prize purse, Louis Smit and Nadene Cahill each got to drive home in a WARRIOR-branded Toyota RAV4 – theirs to drive until the next event in Cape Town on the 6th of October.

In the women’s race, Kirsty Rault took the top step of the podium in 01h11m27s, second was Gabriella Holmes in 01h12m53s, and rounding off the podium was Mandie Landsberg in 01h14m45s.

The Rookie Elite athletes completed a 5km course incorporating 15 obstacles. In the men’s elite race, Brandon Hulley claimed gold in a time of 36m45s, silver went to Cayde de Waal in a time of 39m57s, while Dylan van Tonder claimed bronze with a time of 41m50s. In the women’s race, first place went to Megan van Tonder in 50m08s, second was Michelle Gonsalves in 01h02m11s, and third was Shaylee Hulley in 01h03m07s.

A highlight of each WARRIOR weekend is the Reebok Sprint Race – an action-packed event that involves a shorter and compressed obstacle course completed either individually or as a team.

The hotly-contested men’s race was won by Jack JP Mare, with Brandon Hulley in second and third was Ruan Eygelaar.

The next event is TOYOTA WARRIOR #7, which takes place on the 6th of October 2018 in Durbanville, Cape Town, Western Cape.

For the full results of Toyota Warrior #6, visit www.saseeding.com.

For more information or to enter, visit www.warrior.co.za.

Toyota WARRIOR, powered by Reebok, is back with mud and obstacles built to sustain and delight the thousands of athletes, large and small, tall and short, thin and large that are ready to challenge themselves having fun building better humans.

The event calls adventure seekers from all walks of life – whether a weekend WARRIOR or an elite athlete hoping to snatch up the series title. With a Rookie, Commando, and Black Ops category on offer, WARRIOR has something for everyone.

For the first time in the popular series there will be an escape route for those who don’t find the idea of mud particularly appealing. Instead of diving into the infamous Mud Monster, participants will have the option of taking a penalty loop that will take them the same amount of time to complete. The ‘mudless’ option will not be made available to any Elite athletes, however.

Adventure seekers looking for some extra high-speed excitement have the option of entering the popular Reebok Sprint Race.

A specifically designed children’s obstacle course will be available for little adventurers, as well as a WARRIOR Kids Zone under the supervision of child-minders.

There are some exciting things in store at the 2018 TOYOTA WARRIOR SERIES, powered by Reebok: