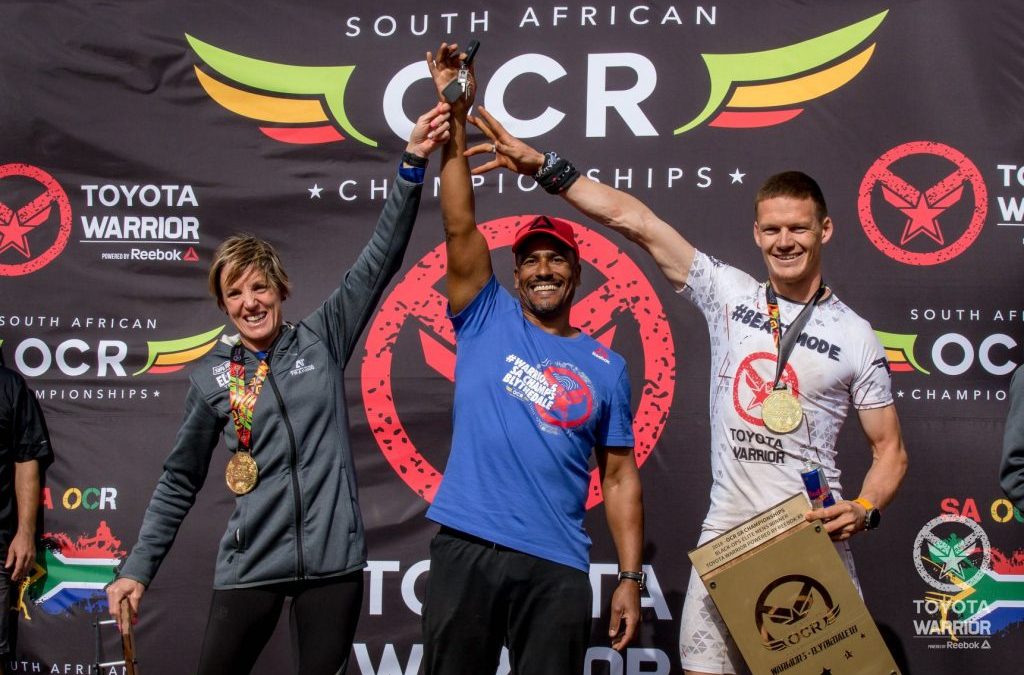 Responsible for bringing the OCR Championships to South Africa is Fritz Pienaar, CEO of Advendurance and the Warrior Company, powered by Reebok, and SAOCR, which was endorsed by Obstacle Course Racing World Championships (OCRWC).

The first South African OCR Championships was held in conjunction with at Toyota Warrior Race #5 at Blythedale Coastal Estate on the 14th and 15th July 2018. Set against a backdrop of pristine beaches, unspoiled forest, rivers and estuaries, the Blythedale Coastal Estate was the perfect setting for the South African OCR Championships.

The men’s Black Ops Elite/SA OCR Champs race was hotly contested between South Africa’s top 2 OCR athletes, Thomas van Tonder (Warrior Brand Ambassador) and Claude Eksteen (Supa Mama). It was neck-and-neck, changing the lead throughout the race, but it was Van Tonder who proved strongest on the day, crossing the Championship line in 01h44m19s, just six minutes ahead of Eksteen in second place in 1h50m26s, and Trevor Lagerwey in third with a time of 01h51m37s.

Says the South African Elite OCR Champion, Van Tonder, “What a day! It was OCR at the highest level, right here in South Africa. I am beyond blessed to take home the official SA OCR Championship title. It’s hard to describe the feeling of months of hard work all coming together on the day.
This course sets the standard for OCR in South Africa. It is the most balanced course there is, a lot of running and big obstacles – it is a leading course. Well done to all the guys involved, from Toyota Warrior, SAOCR and the OCR World Champs, for putting together a magnificent event. A huge shout out to all the athletes who came out to Warrior 5 and laid their hearts on the battlefield.”

Trevor Lagerwey, who placed 3rd in the Pro Championship said, “There is no doubt about it, this course was tough from every angle. The guys did well, from the ocean to the sugar cane, the water, the mud and the tough obstacles, the course was the full deal. This was awesome.”

In the women’s Black Ops Elite/Pro Championship race, Trish Eksteen (Supa Mama) put up a hard-fought battle against Sabrina Daolio, Nedene Cahill and Catherine Robson. Despite falling behind after the Drum Carry, Eksteen dug deep to finish on top, crossing the line in 02h11m49s, with Daolio in second with a time of 02h13m50s, and third was Dominique D’Oliveira in 02h26m18s.

After her massive Black Ops Elite/Pro Championship victory, Trish Eksteen remarks, “This was like racing World Champs right here in our own backyard. It was incredible. What more do you want – you’ve got the beach, forest and amazingly tough obstacles.”

In the 10km Commando Elite with 22 Obstacles (SA CHAMPS & ELITES), it was Brandon Hulley who took the SA OCR Championship win with a time of 59m13s, with Louis Smit in a close second in an hour exactly and Egor Oussov in third with a time of 01h03m52s.

In the women’s race, the top 3 fought a big battle with Naomi Maujean taking the SA OCR Championship victory in 01h35m04s ahead of Jodi Davidson in second in 01h35m25s and Alicia Cawood in third in 01h35m45s.

The top male and female athletes from each age group in the Commando Elite race also received cash prizes, and an entry into the Age Group division of the 10km 2018 OCR World Championships later this year in the UK.

Taking the podium in the men’s 5km with 15 obstacles Rookie Elite race were Cayde de Waal with a time of 47m18s, Tiago Goncalves in second in 48m49s, and Alessandro Cossa in 51m07s.

The women’s 5km with 15 obstacles Rookie Elite race was won by Hanneke Dannhauser in 55m17s, Megan van Tonder in second in 58m29s, and Taryn Strydom in third in 59m45s.

Dannhauser is no stranger to OCR with approximately 17 Warrior Elite Black Ops wins under her belt. She has also won the SA national title two years in a row and won the World Champion OCR Short Course in 2015 in Cincinnati, Ohio, also achieving the ‘Best of the Best’ trophy.

The Individual OCR South African Sprint Championships, which took place on the Saturday, 14 July 2018, is a short course with 10 obstacles and competed at high-speed for big prize money. This highly-contested race requires explosive power at full speed, so it was no surprise that the SA OCR South African Sprint Champions (Individual) went to Trevor Lagerwey and Dominique D’Oliveira who proved their superior strength and speed on the day.

Age category winners for the Reebok Sprint Race included Vaughn Proctor and Sam Gilchrist (Over 40), and Megan van Tonder and Justin Landsberg (Under 19).

The next event is TOYOTA WARRIOR #6, which takes place on the 11th of August 2018 in Nelspruit, Mpumalanga – all the excitement of The Warrior Race compressed into a single day.

For the full results of Toyota Warrior #5, visit www.jumpertrax.com.

For more information or to enter, visit www.warrior.co.za.